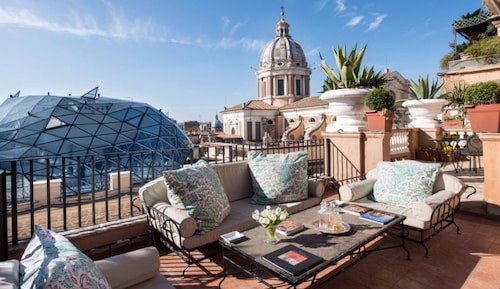 In a fascinating 6 hours walking tour of the city you will discover all the main landmarks of Rome,starting with a journey back in time visiting the valley of the Colosseum,the roman forum,Imperial forum,Venice square and Trevi fountain, one of the gems of the Baroque style,once we arrive be there I’ll point out several great pizzerias where you can taste real home made pizza or spaghetti! After lunch we then procede visiting the ancient field of Mars, which includes the temple of the divine Adrian and the Pantheon, the real tresure of roman architecture, a magnificent monument skills of ancient’s Rome’s visionary architects and Navona square.

As we walk together through the streets and piazzas we’ll discuss the lives of famous artists and all the secrets and mysteries that can be found in this marvellous city.

We will cross the river Tiber by the bridge of the angels and admiring the charming S.angel’s castle witness of many imprisonments and also the place from where Tosca (Puccini’s character in the famous Opera concert) committed suicide.

We will end our tour in the Vatican city state where we visit the largest, richest and the most spectacular Catholic church in the world! You will be impressed to see how many priceless treasures are located inside, including the bones of S.Peter, king of the apostoles… On peak days it can attract more than 20,000 visitors! Rebuilt in the 16th century by a phalanx of Renaissance greats: Bramante, Raphael, Antonio da Sangallo and Michelangelo and later Giacomo dalla Porta and Carlo Maderno. Outside the piazza, by Bernini, also known as the New theatre of the world, is a great example of Baroque style which combines a dramatic sense of emotion and theatrical spirituality that will impress you quite a lot!

This tour provides the perfect introduction to baroque,the real Golden age of Rome.

You will discover a style in which painters,sculptors and architects rummaged emotion,movement and variety in their works. The itinerary starts with the great Spanish steps, Jewel of the late Baroque architecture, then we will see the house of a great Baroque artist Gian Lorenzo Bernini arriving at the most spectacular fountain in the world, also known with the name of the Wishing fountain: the Trevi fountain! We can then cross the Corso Street a real paradise for Fashion victims to arrive at the ancient Field of Mars which includes the Temple of the divine Adrian and the Pantheon.

After having a short break nearby the Pantheon we will keep on walking to reach the ancient stadium of Domitian, now very well known with the name of Navona square, a busy buzzling square where people in Rome still meet just to have a Cappuccino or a tartufo ice cream facing the spectacular baroque fountain sculpted by Bernini: the fountain of the four rivers which combines a dramatic sense of emotion with that of natural elements!

After crossing the river Tiber we arrive at the Vatican City State and we shall enter Saint Peter’s church ending our tour in Saint Peter square also known as the Theatre of the world made by Gian Lorenzo Bernini.

Enjoy the beauty of the city center and typical roman food such as home made pizza, rice balls, pasta, cheese, porchetta, cannoli and wine!

Starting from campo the fiori where we can taste home made bread-stiks and pizza we will procede to Trastevere strolling as romans do and visiting the groucery store antica-caciara to complete our delicious adventure!

A very easy and exciting tour for foodies!

Departing from the port of Civitavecchia we will pick you up at the pier with a deluxe minivan or private car!

The journey from Civitavecchia to Rome will take approximately 90 minutes.

We have several tours available that also include transfers to Rome and back to Civitavecchia. For any kind of question please feel free to contact me, together we can arrange the best service ever for a trip of your life time.

Ndricim
Agent
Login as a buyer only:
Continue with Facebook