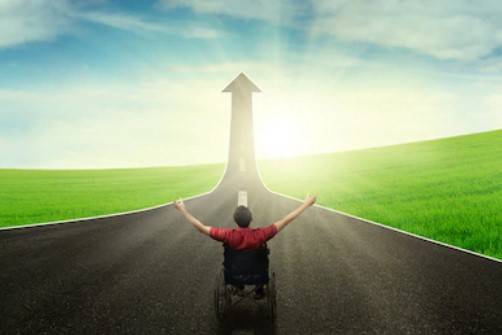 Eko: Online Travel Agent at Travpart With Lack of Disabilities.

This is a story of a Father that has to quit from his job as a driver because he lost his leg and become an online travel agent at Travpart.

Two years ago, Eko lost his right leg due to a car accident. The doctor chooses to amputate his leg so he could go on with his life. But it didn’t stop there. Because of that accident, Eko became paralyzed.

Eko didn’t have any choice but to resign from his current job as a driver. For a year and a half he spent his time to learn to walk again, he learns how to use crutches. He had to learn to move his own body. He needs to learn to spoke. Basically, he needs to learn everything from the beginning again.

Struggle to Make a Living

About a year and a half his family had to do anything to got money. His wife started to open a food catering service, his 17 years old son had to sell snacks, cookies, even a meal in his school and his ten years old daughter had to help his wife.

In his free time, his family will always help him practiced everything from the beginning. Eko showed some progress, and he could walk by himself now. He could talk even sometimes the pronunciation or the meaning of what he said is not quite clear.

He started to move his body and tried to help his wife’s food catering service. People may think that their life is really good now, but actually, it was not.

He was always thinking that no one will want to accept him as a worker with his current condition even if he was getting better now. He was so desperate, as a family leader, he needs to do something to change his family condition and situation.

One day he saw an advertisement from the internet about Online Travel Agent at Travpat, he started to think to give a shot on that space. With his condition he did not need to be a driver; he could apply in another position.

When he still thinking about the pro’s and con’s of this job, he realized that his previous job as a driver was actually helped him to applied. When he worked as a driver, he needed to know every destination before he went there. So this job suitable for him because he already knew a lot of places that could support him in this industry. So, people could visit a new place and felt a new adventure.

As an online travel agent at Travpart, he realized that he could manage everything from home. He has several exciting tour packages in the platform, and guess what, only less in two weeks, one of his packages sold.

It was the first time he could making money online as an online travel agent at Travpart. It was an amazing moment for him, and of course, for his family.

Well, Eko and his family’s life has changed. Eko got a stable income and a job that could accept his lack of physical ability. His wife’s catering continued until this day, and his kids were still helping their parents.

Remember, your lack of ability is not a barricade for you to stop doing something you want and like.

Join as an Online Travel Agent at Travpart and change your life just like Eko.